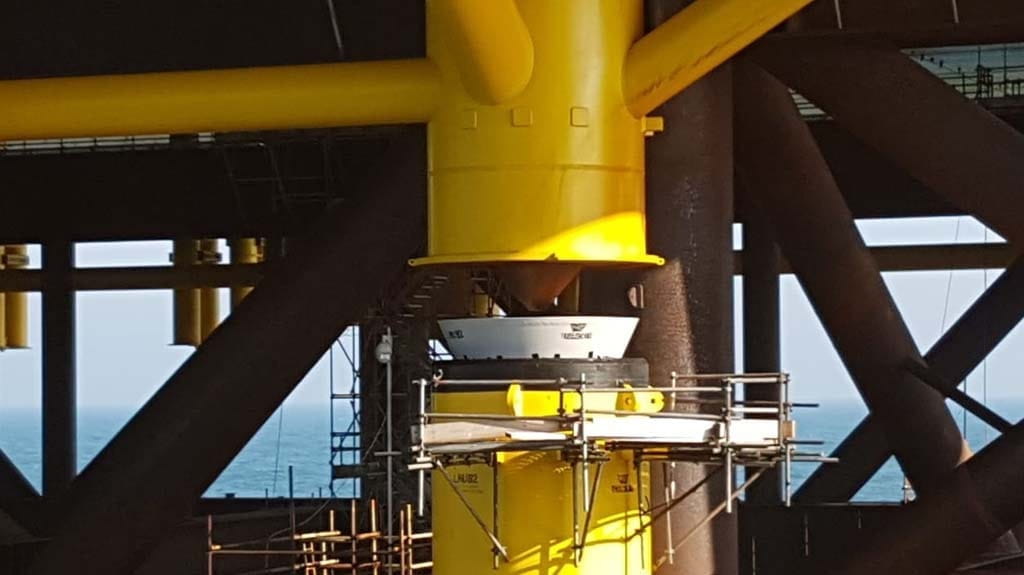 Float-over is a proven installation method for the heavy topside of an offshore oil & gas platform or for offshore wind substation structures out at sea. The float-over process involves the heavy barge transporting the topside structure to the installation site where the mating process begins; the barge manoeuvers into position between the jacket legs and aligns the topside structure with the substructure before it ballasts, slowly connecting the topside onto the jacket substructure.

As the weather and sea conditions can be harsh in an offshore environment, our float-over solutions help to ensure the transportation and installation goes flawlessly, including keeping the topside and substructure safe during the mating process.

LMU (Leg Mating Unit) experience vertical and horizontal compression during the ballasting operation, until the topside deckleg cans are in contact with the jacket leg. To stabilize the mating process and limit the barge sway movement, SSF (Sway and Surge Fenders) will be in action as well. Finally, decompression will occur on our DSU (Deck Support Unit), and effectively transfer the topside’s weight from the barge to the substructure. Odin float-over hardware plays a key role during the mating process for the float-over the operation.

LMUs consists of a steel structure incorporating engineered elastomeric pads, it can be installed either in the topside, or in the substructure. They can absorb immense loads and minimizes the risk of damage created when the topside’s load is transferred to the jacket. The elastomeric pads in LMUs are designed to absorb the static and dynamic forces of the topside structure and relieve the horizontal forces generated by the sea surface movements during the float-over mating operation. After the installation is completed, the topside leg cans are welded to the substructure.

LMUs are tailored to each individual project, with the highest engineering levels, and subjected to rigorous testing to provide performance guarantees. Designed and built to the highest standards, LMUs have been applied to many projects around the world, demonstrating their safety, reliability and quality.
Benefits
Assist in the transfer of static & dynamic load from the barge transporting the topside to the substructure during float-over operation
Install large platform topside without the use of a heavy lift crane vessel
Full-scale testing compression loads up to 18,300 MT
More cost-effective and reduces installation lead time Follow us on LinkedIn to get the latest updates on marine and infrastructure industry.