Straight into a curve 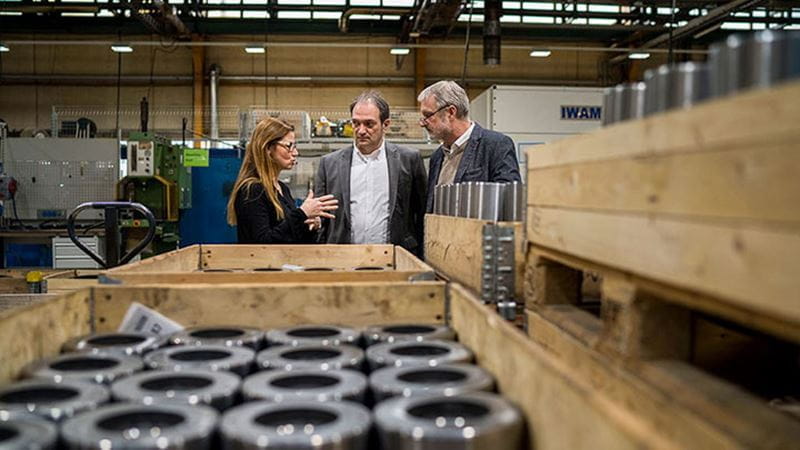 Trelleborg’s axle guiding bush for railroad cars saves energy and money – and it also helps stop trains from screeching as they go around bends.

Getting a train around a bend is a bit like getting a square peg into a round hole – traditionally , railroad wheels and axles are set rigidly at 90 degrees to each other: they just want to go straight ahead, so they have to be forced to go around bends. A new development by Trelleborg allows the wheels to soften up a bit when they go through a curve.

“When running straight at high speed, the wheels should be as rigid and straight on the axles as possible, to provide a stable and safe ride,” explains Rüdiger Hack, Head of Engineering for Rail Applications with Trelleborg Industrial Solutions. “But when you go around a curve, you want the wheels to steer in the same direction.”

The Hydraulic Axle Guiding Bush (or HALL from its German initials) works by varying the longitudinal stiffness of the axles in the bogie, allowing the alignment of the wheel and the axle to be varied in response to different running conditions. This is done by allowing hydraulic fluid to flow between two cavities in the unit through a long, narrow channel according to the frequency of the vibration of the axle.

When the car is moving fast on a straight track, the frequency of the vibration in the system is higher, and the high frequency prevents hydraulic fluid from moving through a long, narrow tube between the two cavities. That makes the system rigid and the wheels and axle run tightly in the bogie. When the car is moving through a curve, the frequency of the vibration is lower and the fluid can move along the tube between the two cavities, allowing the wheel to steer in the direction of movement.

This has significant advantages: it stops the screeching of the wheels on a tight curve. Screeching is a sign that the wheels are producing very high friction levels. This can cause serious damage to the profiles of both wheels and track, potentially requiring regular regrinding and replacement, and wasting a large amount of energy.

The guiding bush technology was developed in 1997. It was tested on real passenger trains for ten years before it was put into series production in 2010.

“The rail engineering industry is very conservative, so we had to create the market for this new product – and that took a long time,” Hack says. The tests took place in two regions where there was practical interest in improving the efficiency of the wheel/rail interface.

“The first tests were in Switzerland – they have a lot of curves on the rail track because of the mountains,” Hack says. “Then we undertook tests in the U.K., where trains run perhaps three times as far per day as in other countries. The U.K. train operators were therefore very interested in reducing wear.” The two countries also share a policy of differential pricing for track use, favoring trains that do less damage to the track.

The results of the tests were remarkable. Trelleborg estimates that, taking energy costs alone, HALL will pay for itself in five years. If you add the savings in wheel maintenance, the return on investment takes just 2.5 years; and with track maintenance included in the calculation, you’re down to just 10 to 15 months. Hack asserts, “If you fitted HALL to the whole fleet running between Dresden and Nuremberg, a distance of 380 kilometres, you could save over 20 gigawatt hours of electricity over the units’ standard lifetime of eight years, enough for a year’s supply of electricity for a town of 11,000 people

The benefit is so great that one day 80 percent of all new intercity passenger cars in Europe will be fitted with HALL. But, says Hack, “The real market is in retrofitting. HALL comes in a variety of dimensions so that it can be simply slipped in to replace existing bushes.”

Original equipment manufacturers (OEMs) have a particular appreciation for HALL, says Özlem Arslan, Sales Global Key Accounts at Trelleborg Industrial Solutions in Velten, near Berlin, Germany. “OEMs are under heavy pressure on price, but they also have to think about how they can sell a train on the basis of its lifetime costs,” she says. “That’s where HALL can provide an advantage because of the savings on energy and wheel maintenance – and if savings on track maintenance are reflected in differential track pricing, the argument becomes even more convincing.”

There are plans to roll out new versions of HALL, to cover freight cars and locomotives whose weight requires a different solution, and a “HALL 2.0,” as Hack calls it, which will include active electronic control. “Currently the system is passive,” he says. “It uses the self-steering ability of the bogie to position the wheel in the curve, but the rigidity of the bush means the wheel position is not optimal. HALL 2.0 will actively steer the wheels using a responsive electronic system controlled by GPS, rail scanning and/or track data.”

But here too the industry is conservative. “The first customers are interested, but it may take 10 to 15 years before they’ll start using the responsive system,” he says.

The existing HALL, says Hack, is based on an idea from the automotive industry. “The same technology is used in motor and gearbox bearings to ensure that cars run gently when idling, and more tightly when driving at speed,” he says. “It means we just have to adapt automotive components.”

But applied to rail, HALL is almost revolutionary. Hack calls it “the first innovation in bogie suspension design in decades – comparable to the step from coil springs to air springs in the secondary suspension.” And he observes, “We have made a small contribution to showing that the rail engineering industry isn’t quite as conservative as we thought.”