Distinctive pink lift bags made by Halcyon Dive Systems retrieve abandoned ghost nets and other plastic waste from the world’s oceans. The special fabric for the bags was developed by Trelleborg.

Trelleborg materials are renowned for their presence in a huge range of technologies and environments worldwide, but sometimes they can be found in the unlikeliest of places that surprise even Trelleborg itself.

Recently, while watching a television news report about removing plastic waste from the oceans, an employee within Trelleborg Industrial Solutions, noticed something familiar: the bright pink lift bags used for the task contained a polyurethane coated fabric that was produced by Trelleborg.

The bags, made by Trelleborg’s customer Halcyon Dive Systems, are used by Greenpeace and others to remove ‘ghost nets’, fishing nets that have been abandoned to drift in the world’s oceans, causing all manner of havoc to sea life.

“I was very surprised when I saw the bags. I had no idea our coated material was being used to help pull up ghost nets in the ocean,” says Steve Brockman, Vice President & Commercial Director for Trelleborg’s engineered coated fabrics, who is proud that Trelleborg can make a contribution to help address what is a growing problem.

The United Nations Environmental Program (unep) estimates that 640,000 ghost nets are left behind in the sea each year. That amounts to ten percent of the 14 billion pounds (6.3 billion kilograms) of waste that makes its way into the ocean annually, and it accounts for 85 percent of the plastic that makes up the Great Pacific Garbage Patch.

The Global Ocean Explorers Survey Foundation (goes) warns that the bits of plastic filling the seas are merging with toxic chemicals from sunscreens, fire retardants (pbdes), polychlorinated biphenyls, tin and mercury, bonding together and being mistaken for food by plankton and other inhabitants of the sea.

Each year, Trelleborg provides about 9,000 yards (8,229 meters) of polyurethane coated nylon fabrics to Halcyon for use in diving equipment, such as the lift bags used to recover lost nets in Ghost Fishing projects. “Trelleborg products are very important to Halcyon,” says Mark Messersmith, COO, Halcyon Dive Systems. Since 2002, Halcyon has been using products from Lamcotec, a company acquired by Trelleborg in 2018. Based in Monson, Massachusetts, in the US, it specializes in engineered polyurethane coated fabrics for, among others, life-saving equipment, such as diving gear.

These poisonous cocktails have already wiped out an enormous amount of the plankton population on Earth, and goes says we have only ten years to correct this death spiral. Plankton eat a significant amount of carbon dioxide and produce an astounding 75 percent of the oxygen generated on Earth. That’s more than the Amazon rainforest.
If all the planet’s plankton are killed off, it spells doom for life on Earth. 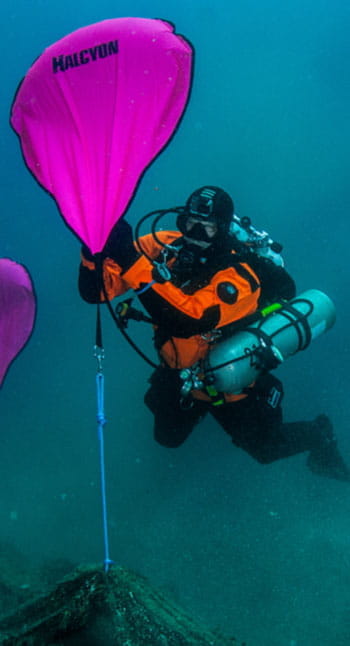 “There’s an incredible amount of plastic out there — wherever you look, wherever you go, you’ll find plastic, even in the Arctic,” says Mark Messersmith, Chief Operating Officer of Halcyon Dive Systems. For many years, Halcyon has been providing equipment like the dive bags a Trelleborg employee spotted in the news report to Ghost Fishing teams, who work around the world to dredge discarded nylon nets from the sea.

The company is located in northern Florida in the us, in the heart of an underground paradise for technical divers, who are daring enough to explore the water-filled cave network that holds the freshwater supporting the surfside communities, including Florida’s famous Ginnie and Wakulla freshwater springs, which are respectively 75 and 300 feet deep. Halcyon evolved from the specialized needs of these divers.

As well as its supply of dive bags worldwide, Halcyon is committed to other conservation projects. It runs Global Underwater Explorers, a specialized dive training agency that is world-renowned, and Project Baseline, a non-profit organization. The latter is dedicated to documenting water bodies to build databases that will establish a baseline to allow for objective scientific evaluation in the future.

Ghost nets are commercial fishing nets, some the size of football pitches, which have been lost or abandoned by a fishing vessel and remain in the sea, continuing to catch and kill fish as well as other forms of marine life. Until the middle of the twentieth century, most commercial fishing nets were made with natural fibers that rotted quickly if lost at sea. However, from the early 1960s, synthetic material such as nylon was used. This is not naturally biodegradable and can last in the ocean for up to 600 years. It is estimated that more than 100,000 whales, dolphins, seals and turtles become caught in abandoned ghost gear each year. Alternative nets are being developed, which will be manufactured from biodegradable monofilament.