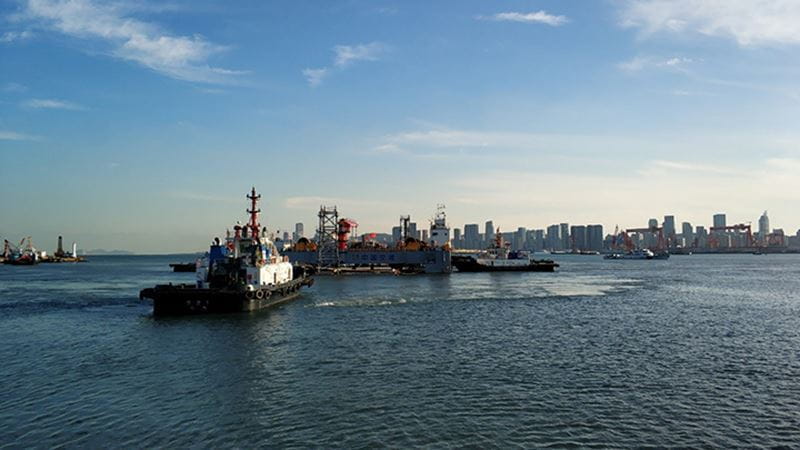 Trelleborg’s marine and infrastructure operation has been awarded the contract to supply all of the closure joints, including a bespoke seal, to China Communications Construction Company (CCCC) First Harbor Engineering Co. Ltd., for the Dalian Bay immersed tunnel in Dalian, Liaoning, China.

The immersed tunnel covers 5.1 kilometers and consists of 18 large tunnel elements, with some weighing as much as 60,000 tons. Upon completion in 2024, it will be the longest immersed tunnel in Northern China. For the 18 tunnel elements and 219 segment joints, Trelleborg was selected to provide a mixture of its industry leading Waterstop seals, Gina gaskets, Omega Seals and a new closure joint seal.

In addition to the 18 immersed elements, there will be 14,000 meters of Waterstop and 7,000 meters of Omega seals provided for the cut and cover section at the north and south shores of the tunnel, which will seal the construction joints and expansion joints. These sealing systems not only showcase Trelleborg’s unique design capabilities, but the seals for the cut and cover sections will also help to speed up the construction time of the project.

In traditional construction, bulkhead and concrete pouring would take two to three months longer underwater. However, Trelleborg’s solution enables all works to be prepared on the drydock, saving significant amounts of time.

Liu Haiying, Chief Engineer of the Dalian Project at CCCC First Harbor Engineering Co., Ltd., says: “This exciting and large-scale project aims to help relieve local traffic pressure in the area by connecting the two banks of the Dalian Bay. The highly technical aspects of such a project required a sealing specialist, as these seals must be able to withstand a maximum 1700mm movement under a 35-meter water head. Trelleborg was the ideal choice as its seals are designed with long-life expectancy, have the ability to handle immense weight and demonstrate strength against extreme environmental factors.

“Additionally, we required the company’s expertise to develop an entirely new closure joint structure for the immersed tunnel. Although this closure joint structure will consist of many units, a section of this joint will be an entirely new M seal design, made especially for this project and the first of its kind. This new seal passed a performance test to an extremely high standard and will also help speed up construction work by allowing us to prepare works on the drydock. Also due to its high sliding capacity, we could measure seal tolerances throughout construction instead of at the last minute.”

Eddy Chen, Sales Director at Trelleborg’s marine and infrastructure operation in China, commented: “The Dalian Bay immersed tunnel is an exciting project for Trelleborg. As a global leader in sealing systems for immersed tunnels, our specialist expertise was not only selected to supply seals for the entire project but to also invent an entirely new type of Membrane seal for the closure joint structure. This new joint is made up of various units and once in use, the new membrane seal will be the widest seal ever used in an immersed tunneling project.

“One of the main challenges for the development of this seal was ensuring that it not only had a wide movement of 1700mm, but that it could simultaneously handle the challenge of high-water pressure. As the original seal design has a capacity to withstand a wide movement of 1000mm, the seal had to be redesigned and tested for 1700mm. The seal passed the design requirements with a high-performance and high safety rate. As well as the benefits the seal provides in terms of decreasing construction time, as its already watertight, its installation will also save time and allow for final tunnel completion with minimal effort.”

Trelleborg’s Gina gasket and Omega seal are used between the sectional elements of immersed tunnels to prevent water ingress due to external water pressure. Trelleborg’s sealing systems promise a product life expectancy of up to 120 years with little-to-no maintenance. They are designed to handle intense transfer of hydrostatic loads and movements between tunnel ends caused by environmental pressures such as seismic activity, soil settlement and temperature effects.