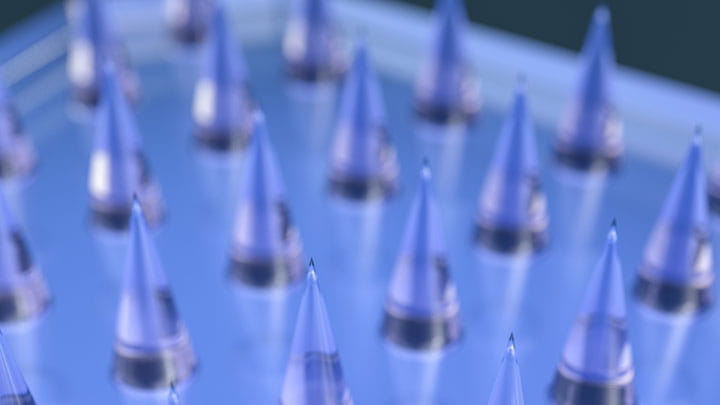 Medical patches have been around for a long time, but new versions with tiny needles could revolutionize drug delivery.
No one enjoys being stuck by a needle, but injections are an effective way of getting drugs into the people who need them. Now, for some types of injections – delivering insulin to diabetics, for example, or vaccinations to those at risk of disease – there may be another way.

Researchers have been looking at the use of tiny microneedle patches as an alternative for drug and vaccine delivery. The patches, about the size of a fingernail, contain rows of microneedles. When the patches are applied to the skin, the microneedles penetrate the skin’s top layer, enough to administer the medication in thepatch into a person’s system.

“The world has been using patches for a long time,” says Luis Tissone, Director of Life Sciences for Trelleborg Sealing Solutions in the Americas. Nicotine patches are
probably the most familiar example. But for larger-molecule substances, such as insulin, this type of patch did not work initially.

The skin's anatomical peculiarities make it difficult to cross with the skin’s stratum corneum, the outermost layer, being the major barrier. However, the layer underneath, the viable epidermis, also plays a protective role.

According to research published in Pharmaceutics, only compounds that are able to get through the stratum corneum and diffuse through both layers of the epidermis have the potential to reach a person’s circulation and achieve systemic effects.

Patches with microneedles may be the solution. Tissone explains that the microneedles penetrate those outer layers but stop short of reaching the pain receptors and blood vessels beneath. “You don’t really feel any pain as the needles in the patches do not really get that deep,” he says. “It’s an optimal subcutaneous region to facilitate drug delivery.”

Trelleborg has decades of experience using liquid silicone rubber (LSR) technology to create sealing solutions for the life sciences, food, beverage and auto industries, among others. Now it is migrating that LSR know-how to microneedle patches to deliver drugs and vaccines.

Using LSR in microneedle patches provides significant advantages in terms of biocompatibility. It’s an inert material, Tissone explains, so it can be applied without
the risk of harmful substances leaching into the body or causing skin irritation.


Ahead of the competition

“We're going to see, sooner or later, a lot more of these microneedle patches being approved by the FDA,” Tissone predicts. Indeed, the market for transdermal drug delivery, which includes but is not limited to microneedle patches, was valued at USD 13.5 billion in 2013 and is expected to reach USD 21.7 billion in 2018 according to the Micromarket Monitor.

Trelleborg is working with device developers and manufacturers to supply highly engineered components for drug delivery systems that include microneedle patches. The company’s ability to manufacture complex micro-sized LSR molded products to tight specification and cleanliness levels in millions of pieces “is definitely something that puts us ahead of the competition,” Tissone says. “We have a high level of expertise in LSR specialty components.”

Within the current state of advanced microneedle patch development, LSR is seen to serve a useful purpose as a carrier of drugs as well as of the very precise microneedle structure, each of these associated with unique manufacturing challenges. Likewise, LSR can effectively be used in the form of a protective element across the delicate microneedle structure prior to its application on the skin.

“Having special expertise in LSR toolmaking and process engineering, coupled with decades of experience in drug delivery devices, is really something that sets us apart from our competitors, and it’s what gives confidence to our customers,” Tissone says of Trelleborg LSR capabilities. And those capabilities mean Trelleborg is likely to remain a significant player in this growing drug delivery segment.