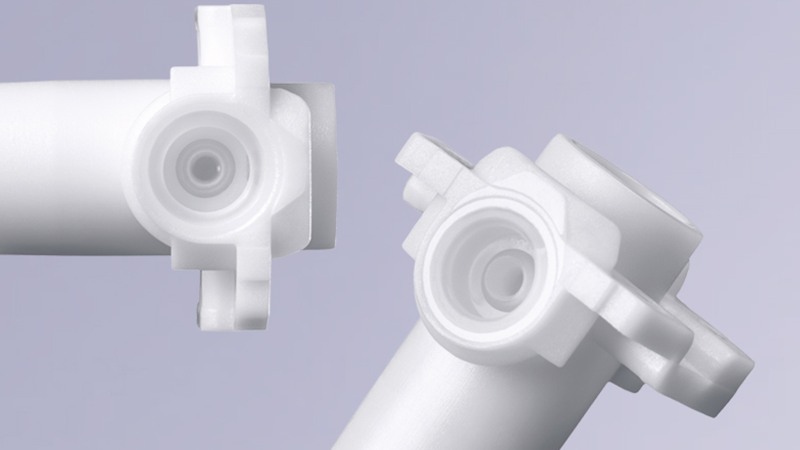 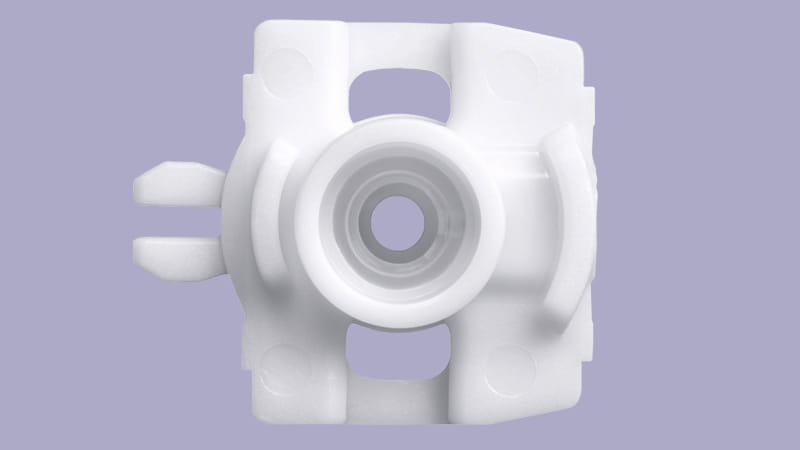 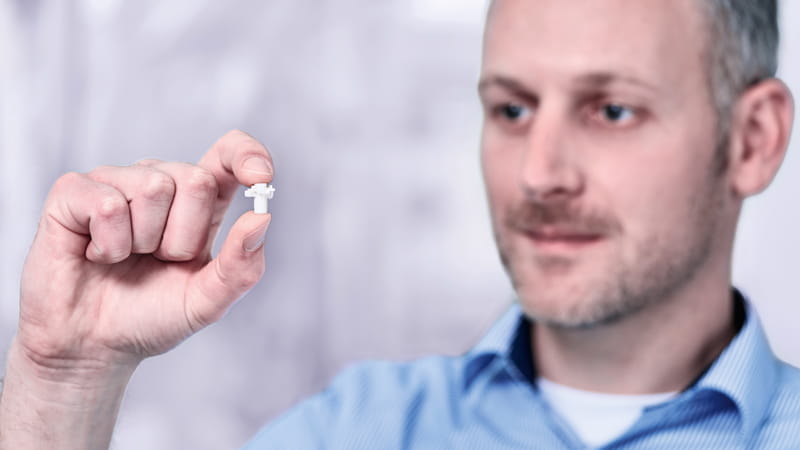 PEOPLE WITH CHRONIC ILLNESSES
need to monitor their bodies. Diabetics check insulin levels and people suffering from Parkinson’s adjust their apomorphine dosage. Incorrect administering of medication can make treatment less effective or even, in the worst cases, be life-threatening.

Some conditions can be managed well with injected drugs Portable medical devices, such as insulin pens, are especially convenient, enabling the fast and safe injection of liquid medication in everyday situations. The users, however, still need to remember the dosage and timing precisely.


Automated dosing systems go one step further. These palmsized medical devices can be attached directly to the skin with adhesive plasters, for example. Located on the surface in contact with the patient is an extremely fine needle that extends automatically to inject a preprogrammed quantity of medicine without the patient having to make a single move. Precise control regulates delivery of as little as a few microliters of active ingredient over a period of minutes, hours or even several days. This improves the quality of life of those affected, granting them more flexibility and making delivery of medication worry-free.

The centerpiece of these medical devices is a tiny microinjection pump that reliably delivers precise doses of essential medication. Trelleborg Sealing Solutions was commissioned by one of the world’s leading suppliers of pharmaceutical and medical products to help develop a pump housing made of plastic and silicone. Deep inside this pump a unique, innovative material from the international chemical company for highly developed specialty chemicals WACKER ensures smooth operation.

“The pump’s extremely precise dosage of drugs was crucial to the success of the entire device.” 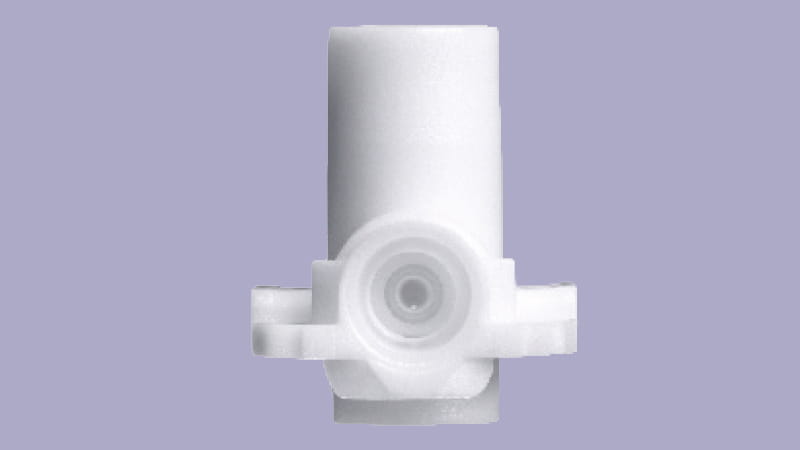 “The pump’s extremely precise dosage of drugs was crucial to the success of the entire device,” says Felix Schädler, Project Manager at Trelleborg Sealing Solutions, who played a key role in the development.

The delicate microinjection pump consists of a cylindrical hollow body in which a plunger is moved up and down electrically. It draws the drug from a supply vessel and conveys
it to the injection needle. The pump housing comes in different versions that can deliver two microliters or ten microliters of liquid medication. With a length of 15 millimeters, the smaller pump is not much bigger than a fingernail.

Friction, sealing and the bonding of two different materials in a very tight space posed a challenge to the developers from the start. In addition to wanting a compact design, the customer also attached importance to the lowest possible cost, as the injection pump in the final medical device is a single-use product. For safety reasons, all the elements of the dosing system that come into contact with the medication or the patient, including the injection pump, must be disposed of after use. But other components, like the housing, motor and battery, can be reused.

Two-component injection molding the only option

“Due to the compact dimensions and low tolerances involved, the part could only be manufactured using two-component injection molding with seals made of Liquid Silicone Rubber (LSR),” says Felix.

Processing LSR is the field of expertise at Trelleborg’s Stein am Rhein site in Switzerland. The facility has a comprehensive cleanroom production facility for medical technology applications, where production takes place under strictly controlled and monitored conditions. 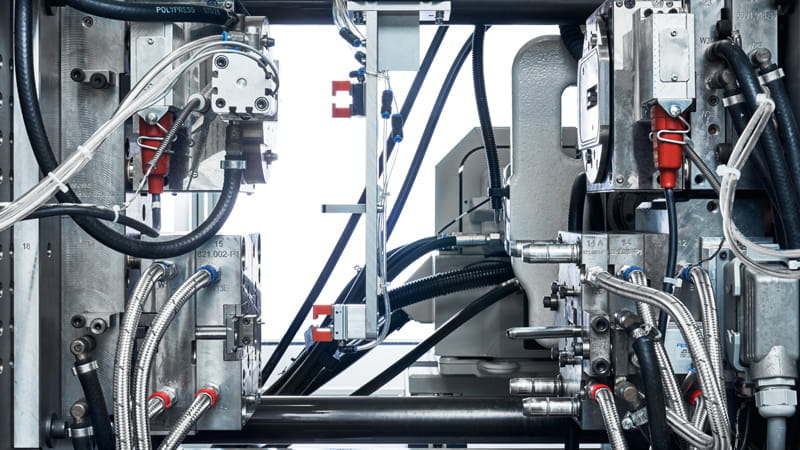 Multicomponent LSR technology is the simultaneous injection of Liquid Silicone Rubber (LSR) in combination with engineered plastics and other substrates. Also commonly referred to as 2K, 2- shot, 2C LSR, multicomponent injection  molding, or co-injection, this technology is used to develop innovative solutions, combining two or more individual materials into one fully bonded component, in both hard-soft and soft-soft combinations.

One of the most beneficial advantages of LSR molding is that it allows the creation of complex geometries, where a number of different components assembled together can be combined together into a single component.

A focus on eliminating the need for secondary component assembly is important in lowering total cost of ownership and achieving a higher integrity product for the medical device manufacturer. A single component rather than an assembled one removes the cost and risk associated with assemblies, such as potential leak paths or undesirable spaces for bacterial growth.

By extending design options as no other technology can do, LSR molding gives an equipment developer the opportunity to go beyond function; design profiles are virtually boundless. This can offer benefits that a medical device manufacturer may not even be aware of being possible. It creates considerably more robust and cost-effective solutions that are of higher integrity, which can fit into a smaller design envelope. 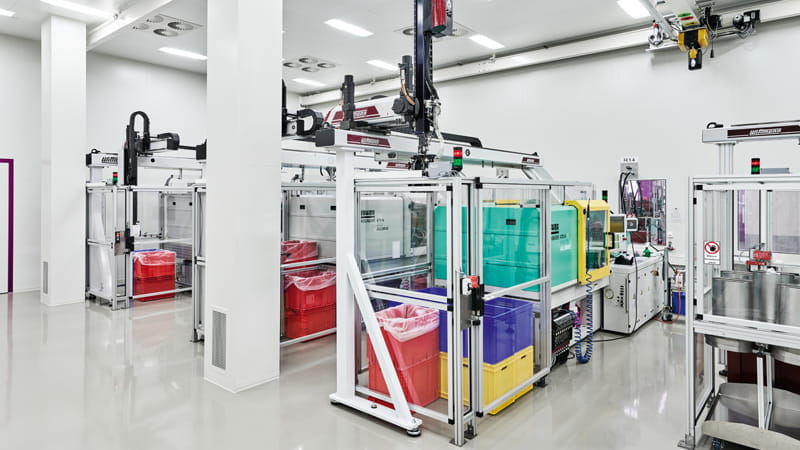 When Thermoplastic Elastomer (TPE) proved unsuitable for this specific application, Schädler and his team initially turned to SILPURAN® 6700 self-adhesive LSR. WACKER has marketed specially developed silicones for medical technology under the SILPURAN® brand for a little over 10 years. “In this LSR line for sensitive applications, we use special formulations that can satisfy particularly demanding purity requirements,” says Dr. Ulrich Frenzel, who works in technical marketing at WACKER.


Tests conducted with the medical-device manufacturer and Trelleborg’s elastomer laboratory in Stuttgart, Germany, demonstrated, among other things, that SILPURAN® 6700 can withstand long-term storage with the medication. Since the drugs come into direct contact with the seals, interactions of any kind had to be ruled out. When the pump’s functionality was put to the test, however, it turned out that the friction between the plunger and the cylinder surfaces made of SILPURAN® 6700 was too high.

Even the slightest over- or under-dosage of medication can lead to life-threatening situations for the patient; it is therefore essential for the pump to operate smoothly. If friction between the plunger and cylinder were high, more force would have been required for the pumping action, which in turn would necessitate a different drive and thus a larger device overall. Alternatively, the customer could have used lubricants. Those, however, would inevitably come into contact with the drug being delivered and possibly impair or, in the worst case, contaminate it. For the same reason, the use of oil-bleeding silicones, such as those offered by WACKER for automotive applications were ruled out.

But WACKER’s materials specialists managed to find a solution that works without oil.

“We presented this challenge to WACKER’s material developers and they very quickly came up with some initial ideas for an innovation that might work,” says Felix. “A wholly new materials technology was developed and ready for marketing within just one year.”

Dr. Florian Liesener from WACKER’s technical marketing says, “We already had LSR with self-adhesive properties in our portfolio, as well as products with low coefficients of friction, but none for sensitive applications that offer both together. The micropump was thus the perfect opportunity for us to combine both properties in one silicone.”

“A wholly new materials technology was developed and ready for marketing within just one year.”

The resulting LSR needed properties that appear physically incompatible: high adhesion and low sliding friction — in other words, holding on and letting go at the same time. Impossible, one might think. “Yet WACKER demonstrably solved this chemical conundrum, without any problems,” Felix says.

The material developed made its public debut under the name SILPURAN® 6760/50 in 2016. To this day, it is the only market ready, self-adhesive, friction-modified LSR with biocompatibility certificates.

SILPURAN® 6760/50 plays an important and reliable dual function in the compact drug-delivery device. It may be invisible to its users, but it gives them completely new freedoms.