ACROSS THE SKIES, transporting passengers for business and pleasure quickly and efficiently. Though many people marvel at them gliding through the air, far fewer take the time to consider all the engineering time and thought put into each individual component.

“Weight and time are money,” laughs Torben Andersen, Director Aerospace Segment Management at Trelleborg Sealing Solutions. “It makes sense that the industry is looking to reduce planned maintenance and weight, without compromising on safety. Every single component of the plane can contribute to this.”

Building on an already successful design, Turcon® VL Seal® II is an evolution of the original Turcon® VL Seal®. Its predecessor has been successfully used as a unidirectional rod seal for reciprocating motions for years, installed in aircraft traveling all over the world.

Trelleborg Sealing Solutions applied its usual attention to detail and focused its resources on the seal, to see what could be achieved. “Our engineers are capable of combining many functions in the same part. What looks simple is actually the result of many hours of testing, calculating and re-designing to ensure that every gram of material is both necessary and contributing to overall functionality,” says Torben. 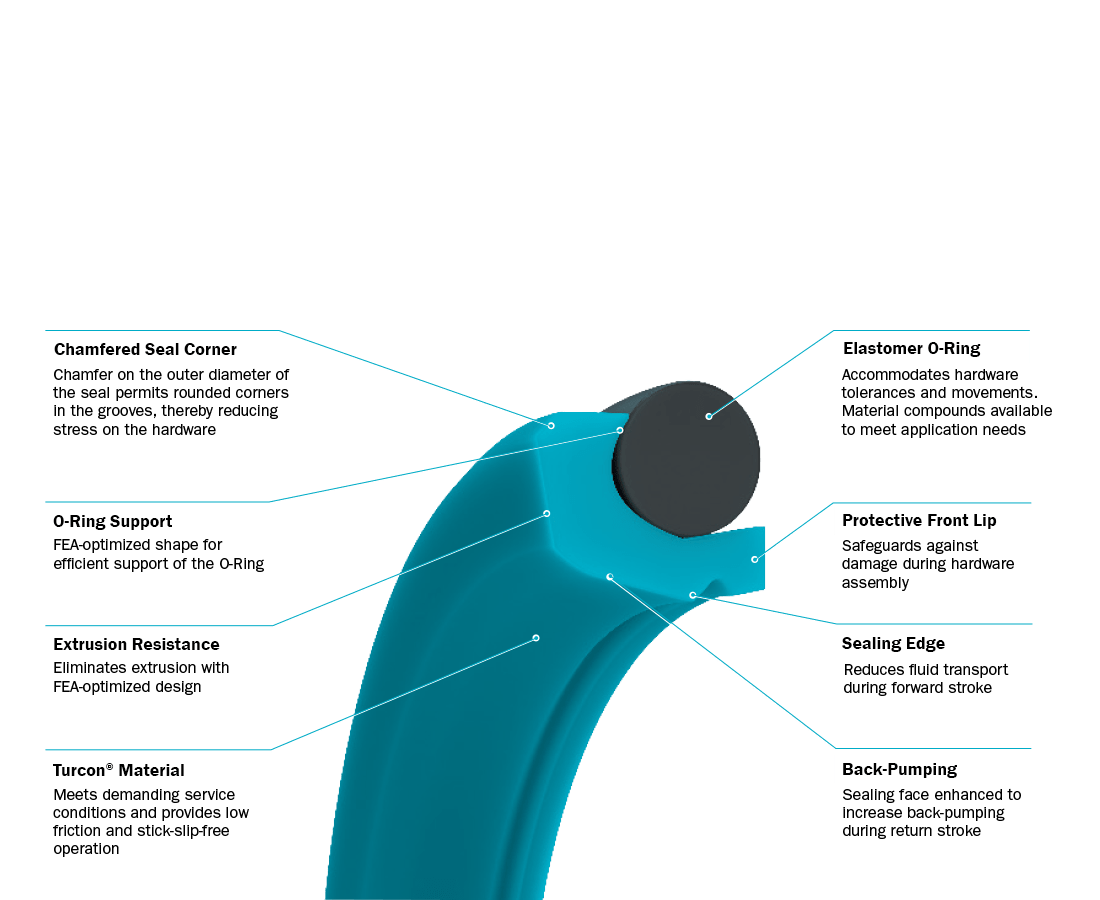 
The seal itself is a carefully engineered L-shaped Turcon® part with a supporting O-Ring to increase stability and resilience. Its cross-sectional profile is unique, with each angle designed to offer benefits to overall performance. Chamfered corners allow rounded installation grooves, reducing hardware stress. The seal back is angled in such a way to allow the width to react to the pressure encountered at the time. This feature combines with the geometry of the sealing lip to replenish fluid during strokes to increase seal life.

The lip itself also shields the seal during installation, preventing damage, but ‘lifts’ away from the rod during operation to ensure it doesn’t compromise friction capabilities. As every aspect is critical to overall performance, the seal contact face was extended and curved to protect the supporting O-Ring and keep it in position, even under high pressures

Much of the difficult design work was achieved through FEA simulations, ensuring extrusion is kept to a minimum and that engineers could fully understand the pressure distribution across the whole seal profile. This led the design in the correct direction, but the results needed to be confirmed. The fledgling Turcon® VL Seal® II was tested
on the Trelleborg Sealing Solutions primary flight controlseal test rig, which simulates combinations of extreme operating conditions.

Pressures reach 5,000 psi / 345 bar at temperatures from -62 °C to +163 °C / -80 °F to +325 °F repeatedly to replicate real world conditions as closely as possible. The test bench crucially can achieve pressure rise rates of 360,000 psi/second (24,800 bar/second), meaning that millions of pressure cycles can be run, shortening development time from months to weeks. The results were clear. Back-pumping performance is more than double that of the original Turcon® VL Seal® with half the accumulative leakage over one million cycles.

Attention has been paid to the total arrangement, as the seal does not exist in isolation. “Back-up Rings are very important to provide extra stability and prevent extrusion, but can contribute to wear and friction,” says Torben. The Back-up Ring for Turcon® VL Seal® II was re-evaluated and specially engineered with Trelleborg’s Lubrication Management principles in mind. It permits a small amount of fluid through to lubricate the entire system, decreasing friction and extending life of both the hardware and the seal. These are provided as standard with Turcon® VL Seal® II. To fully optimize the performance and reliability, two Turcon® VL Seal® II can be installed together with scraper elements to remove the need for drain lines completely as the pressure can be more accurately controlled between the seals with an enhanced back-pumping ability.

Torben adds: “This view and understanding of the whole arrangement can only be achieved through years of expertise. Our Lubrication Management technologies, seal engineering and material choices can increase life of not only the seal, but the whole system.”

The lifetime of each product is always studied, as it is vital to timing and planning maintenance. Using the features of the seal, these components aim to be ‘sealed for life’. “What this means is that we expect the seals to last the entire lifetime of the actuator – no replacement,” explains Torben.

Turcon® VL Seal® II represents a true evolution of its predecessor and is rapidly becoming the standard seal for these kinds of application. “It’s now easier to install, more
reliable and performs better, reducing weight further and increasing fuel efficiency” finishes Torben. As one of the most versatile aerospace seals ever developed, it fits into standard AS4716 grooves, enabling easy replacement of existing seals with the Turcon® VL Seal® II in primary and secondary flight controls in airplanes and helicopters and landing gear shock absorbers and actuation systems. It is available in a range of Turcon® and Zurcon® materials for use in a wide variety of extreme operating conditions. These are combined with O-Ring compounds suitable for use with all hydraulic fluids and service parameters.