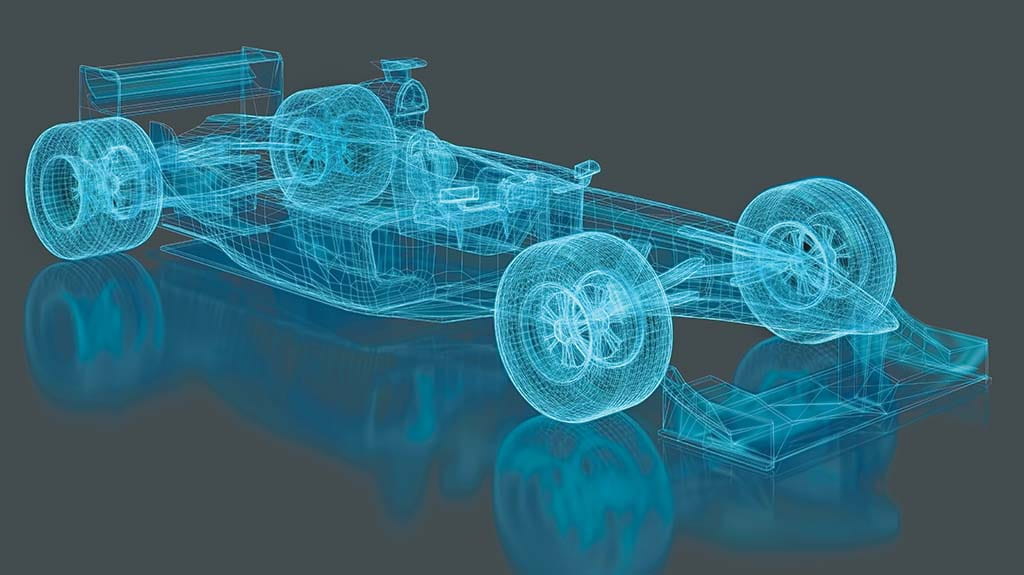 Fibreworks Composites custom-designs, engineers and manufactures composite parts for customers within North American Motorsports, Formula 1 racing solar and aerospace industries. Absolute precision and high performance are necessary in these industries, which makes finding the right tooling board vital.
In order to serve its customers within the motorsport industry, Fiberworks Composites need a high performance, fast machining, cost-effective epoxy tooling board that can run at high temperatures, as well as offering direct-to-part machining for carbon fiber parts and patterns for carbon fiber molds.

Most tooling materials that can run at higher temperatures can be expensive and come with some downsides, including excessive use of surface sealant in finishing and brittleness. Fiberworks Composites applications needed a solution that was both cost-effective and not prone to brittleness.

Fibreworks Composites contacted Trelleborg Applied Technologies to explain the problems with their current solution. One key issue was the lower Glass Transition Temperature (Tg) of their current board, which limited the curing process and the speed at which parts and tools could be developed (Tg is the temperature at which the material transitions from its glass state to a rubbery state). This was a key driver for selecting a new material.

Instead of pointing Fibreworks Composites to options already developed by Trelleborg, the company’s response was to create a new board to fit the customer’s requirements.

The goal was to develop a material similar in price to Trelleborg’s existing epoxy EP678 system, but that could run on higher temperature tooling runs, cutting down on autoclave time, and that would allow parts to be manufactured directly from the board.

By working to address Fibreworks Composites’ issues, Trelleborg created TC760X, a superior epoxy tooling board that delivers outstanding performance, runs at high temperatures, has a rapid turnaround and is cost-competitive.

During the process Trelleborg initially developed the TC760, a gray board that machined and finished well and had a good temperature elevation, but also had increased cracking and brittleness during high temperature processing.

By modifying the formula Trelleborg subsequently created the TC760X, a material that has a Tg of +140°C, with a low Coefficient of Thermal Expansion (CTE) and dust-free machining; the board shaves rather than chips for a cleaner cut.

Further collaboration between Trelleborg and Fibreworks Composites resulted in development of a board that was tougher, without sacrificing the Tg. Not only is the Tg higher than the board Fibreworks Composites was originally using, meaning faster curing time, an A-class finish that requires 50% less sealing coats than other boards. This equals less finishing, an overall faster production time and minimal cracking or chipping.

Bryan Nortje, Fibreworks Composites “In the dynamic of making the board ‘a little softer,’ sacrificing Tg for toughness, we were still well within our comfortable processing temperature range, and we gained a tougher board, and that translated into lower issues with thermal stress in the heat cycling process with improved machining.”

The finish of the TC760X only requires four coats to reach the desired final surface finish. Other tooling boards can need up to nine coats, so preparation time is cut including waiting time between coats, lowering the overall total cost of ownership. The dust free nature of the material means less machine breakdowns and less airborne particles, making a cleaner working environment for operatives and ultimately, more economical factory ventilation.

“The TC760X doesn’t dust, it shaves rather than chips, giving a cleaner cut and a lot less associated dust.” Bryan Nortje, Fibreworks Composites Feedback from Fibreworks Composites’ subcontractors has also been positive; “the TC760X cuts and machines like a polyurethane board, but with the technical performance of an epoxy board.”

The process to create a tailored epoxy tooling board took less than six months and resulted in a partnership between Fibreworks Composites and Trelleborg. These kinds of partnerships evolve industry standards and create exceptional products and solutions, but beyond that, working together allows Trelleborg to solve precise problems for its unique customers.
“It was very rewarding to have the willingness of Trelleborg to support us in the development of the board, especially knowing that we’re not going to take a large volume. So that was great, really great” Bryan Nortje, Fibreworks Composites.