The future of syntactic foam materials for resident ROV applications There is a paradigm shift towards the use of Resident ROV (RROV) systems, mainly driven by the cost savings and operational benefits for oil and gas, and offshore wind energy industries. This has fuelled global research projects in two main areas of RROV technology development:

RROVs deployed at deep-sea and ultra-deep-sea depths demand maximum durability. The lack of higher strength syntactic foam materials capable of withstanding the extreme conditions and constant hydrostatic pressure experienced at depth for extended periods, is one of the major barriers to the commercialization of RROV technology.

Published information and research shows that existing RROV submersibles only provide a maximum service lifetime of up to six months when permanently deployed in deep-sea (2,500-4,000 MSW) and ultra-deep-sea (5,000-6,000 MSW) applications.

This brings a new challenge to materials scientists and engineers, to develop innovative syntactic materials that offer serviceability well beyond six months, to a much longer duration of around two years to support the needs of the industry.

The evaluation of several resin matrix systems along with the screening of various grades of commercially available HGMS, and in-situ and ex-situ surface functionalisation HGMS, were also included in the process.

Data had to be collected at specific timed intervals for analysis. This led to the development of an accelerated ageing test methodology, which allowed faster acquisition of data to accurately predict the material service lifetime, simulating the real-life application and reducing test programme duration.

Water absorption was identified as one of the most critical parameters in the performance of syntactic foam materials for long-term immersion in deep-sea and ultra-deep-sea applications. Therefore, this became the focus of most of the testing and qualification.

The water absorption data was tested for fit to Fickian and Arrhenius models. The Arrhenius model was used to make service lifetime predictions. This was followed by the validation of the model under real life conditions, at temperatures of +10 °C or lower to replicate the temperatures experienced by RROV at depth ratings below 500 MSW.

Comprehensive testing was performed on numerous development samples using Trelleborg’s in-house pressure testing facilities. Water uptake findings and results for Trelleborg’s TG-3000R material, which was subjected to ageing at different temperatures in the range of +10 °C to +50 °C under the operational pressure of 310 bar are highlighted in table1.

Table 1. Details of the samples used in this study

A pass/fail criterion was set at less than 2% water absorption, which is Trelleborg’s internal standard for buoyancy material testing for short-term cyclic applications.
Initial experiments were performed at elevated temperatures, with data used to verify whether the Arrhenius Law was followed. By plotting the water absorption against the inverse of absolute temperature, a straight-line relationship with good correlation coefficients validate the Arrhenius fit as shown in figure 1. 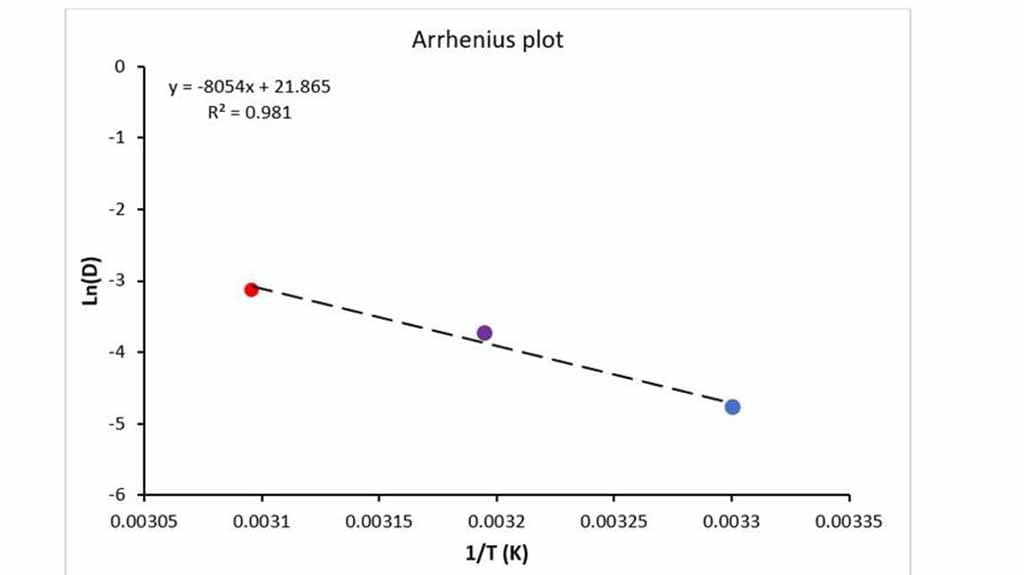 Figure 1. Arrhenius plot of TG3000-R at temperatures of +30 °C, +40 °C & +50 °C respectively. The graph shows a linear fit with good correlation coefficient. This clearly shows that material follows Arrhenius law in accelerated ageing and data can be extrapolated to predict the service lifetime at lower temperatures.

Stage two of testing, included experiments carried out at +10 °C in order to validate the model. The graph in figure 2 shows the results of model and experimental data for comparison. The service lifetime predicted by the model based on water absorption values from accelerated ageing data, aligns with experimental data at +10 °C. The graph in figure 2 also shows that the model is slightly more conservative in prediction of service lifetime than observed in validation experiments in a model of 32 days versus an experiment of 45 days. Since diffusion process is better followed at lower temperatures and as the temperature increases a deviation from pure diffusion behaviour is observed as other factors (hydrolysis of glass microspheres and degradation of polymer matrix) contributing to the water ingress become important. This trend has been found in repeated experiments, giving confidence in the reliability and accuracy of the model. 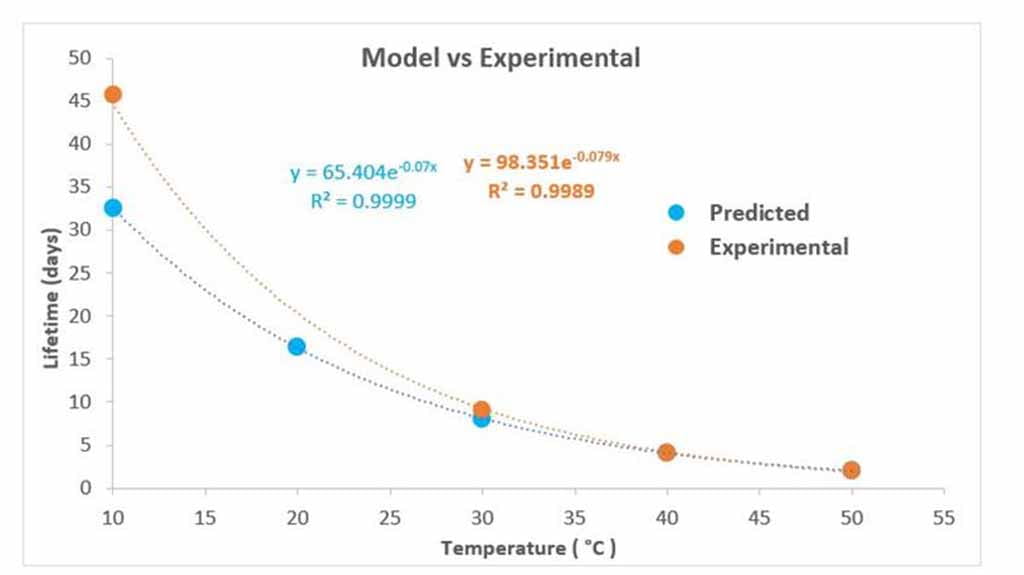 After the successful validation of the model, Trelleborg launched an extensive testing programme on its TG-R range of materials utilizing both cube and cylinder specimens (different S/V ratio). For this purpose, TG-3000R syntactic foam material was chosen for testing, undergoing accelerated ageing at +50 °C under hydrostatic pressure of 310 bar, the pressure at operational depth of 3100 MSW, until the material reached 2% water absorption; the failure index value (shown in figure 3). Validation experiments were set to run in parallel with the accelerated ageing, with data used to predict the service lifetime. The output of the model using the water absorption data at +50 °C predicts a service lifetime of two years at +10 °C. 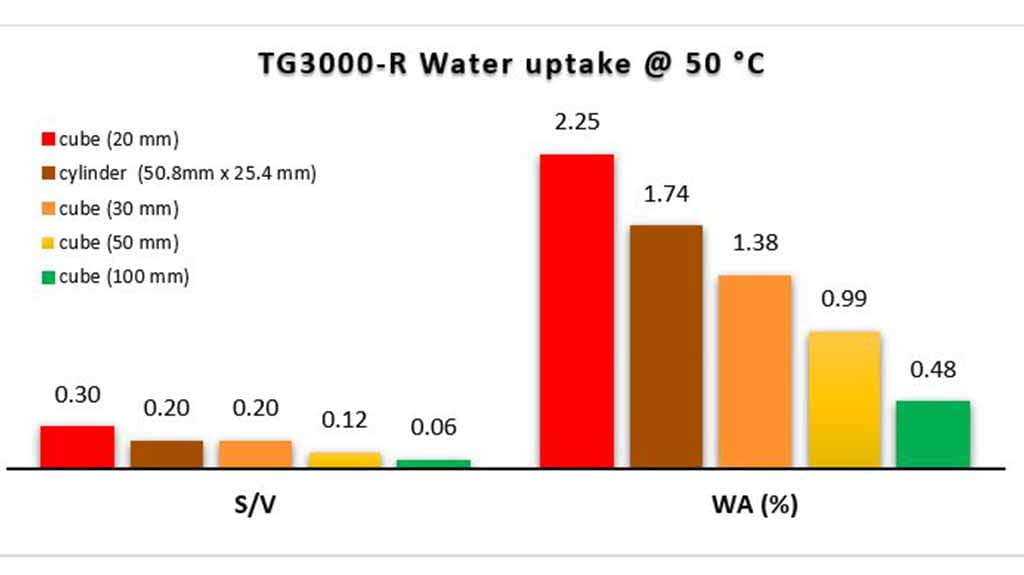 Figure 3. TG3000-R after 42 days of immersion at +50 °C. The data shows the water uptake is dependent on S/V ratio and sample geometry. The graph also shows relationships between S/V and water uptake, higher the S/V and higher the water uptake.  Modelling of this data predicts service lifetime of two years at +10 °C.

Trelleborg’s applied technologies operation recognised the need for superior buoyancy to meet the more demanding requirements of RROVs. It developed and validated simple predictive models resulting in the identification of three syntactic materials capable of resident operation. Trelleborg’s TG-1000R, TG- 2000R and TG-3000R materials are unique within the materials buoyancy sector being fully qualified for long-term continuous use at maximum operational pressure for up to two years. Validation and testing will commence shortly on TG-6000R material to confirm reliability for RROV applications at increased depths.