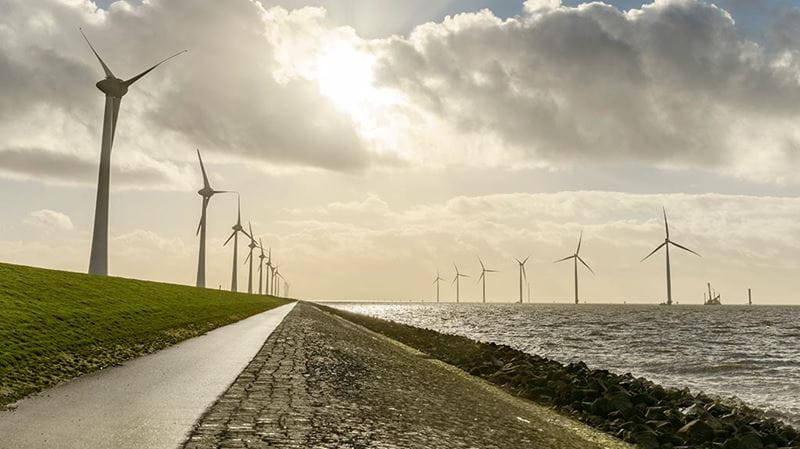 Over the last few years, renewable energy has become more prominent and features in almost every governmental policy across the globe, with China most recently declaring an ambitious goal to become carbon neutral by 2060.1

Over the last few years, renewable energy has become more prominent and features in almost every governmental policy across the globe, with China most recently declaring an ambitious goal to become carbon neutral by 2060.1

The importance of renewable energy sources is exemplified by the fact that green investment and targets have been one of the few areas not effected by the dramatic changes to every level of society during 2020. The president of the European Commission, Ursula von der Leyen, even stated that the European Green Deal will be Europe’s “motor for recovery”. Indeed, wind power forms a central pillar to these renewable energy targets, with both onshore and offshore wind projects projected to increase dramatically over the coming decades, with up to 450 GW offshore wind targeted by 2050, across Europe alone.2

In order to fulfil these exciting and ambitious targets, the impact of wind turbines on radar installations and the consequential objections raised to prevent degradation of radar coverage must be addressed. Wind turbine radar interference is an urgent and complex problem facing the wind industry, compounded by the drive to improve renewable energy contributions within the UK and globally. The global importance of the issue has resulted in leading associations for wind energy across the world identifying it as a key area, resulting in the creation of several dedicated task forces formed specifically to find viable mitigation strategies.

The detrimental impact of wind turbines on radar performance has been known for over two decades, yet has only recently begun to be seen as a significant issue, as the number of windfarms increases and the space where radar stations can be sited without interference is shrinking. The pursuit of a solution has therefore become of paramount importance.

As global leaders in signature management, Trelleborg developed FrameTM from the ground up, designing the product collaboratively with input from both the wind and aviation sectors. This approach highlighted areas of particular importance when considering the role of radar absorbing materials in wind turbine radar interference mitigation:

Making mitigation accessible to all

While the issue of wind turbine radar interference can seem more pressing for large offshore windfarms comprising of hundreds of wind turbines generating gigawatts of power, the coexistence of wind turbines with radar is equally important for a single wind turbine built, for example, at an onshore environmentally-conscious company site wishing to lower their carbon footprint.

Depending on the location of the wind turbine, even a single site can cause enough clutter on a radar screen to warrant an objection from the operator and necessitate a mitigation strategy. This can leave developers both large and small with considerable additional costs to their windfarm, which might not have been anticipated at the outset; particularly for small developers, this might mean the difference between continuing with a project or not.

A focus of Trelleborg’s new FrameTM technology has been to develop a radar mitigation strategy, which is available to all windfarm developments regardless of size. A recent key development has been the incorporation of active radar absorbing fillers into the glass fibre fabric, thus minimising disruption to wind blade manufacturing, removing any turbulence or additional weight complications, and ensuring a highly cost-effective solution for all parties. Effective at thicknesses of just 3 millimetres for X-band radar interference, and capable of reducing the radar cross section of complex moving blades to below the detection threshold, this innovation has been instrumental in making the new technology an at-source solution in all scenarios.

The use of radar absorbing materials to mitigate radar interference opens a unique opportunity to access potential benefits for the wind turbine itself, which are not possible when using mitigation techniques that focus solely on the radar capabilities. Uniquely unlike its alternatives, such as radar hardware solutions or radar absorbing materials, Frame™ can actively improve the wind turbine mechanical properties, as they are applied directly to the windfarm itself.

Recognising that in the current climate it is perhaps more important than ever to avoid over engineering and additional expenses with no benefit beyond simply solving a problem, Trelleborg has designed FrameTM to bring added value to wind blade manufacturing. By improving the mechanical properties of the blades, FrameTM can increase efficiency over the lifetime of the turbine, resulting in a reduction in the overall cost of energy production.

As with any new technology, manufacturability is perhaps one of the most critical aspects to the widescale implementation of these new reduced radar cross section wind blades with enhanced mechanical properties and performance. The method of integration of FrameTM into the fibreglass fabric itself has been a key development focus to ensure it minimises the disruption to the blade manufacturing process.

Old and new manufacturing methods have been trialled, and compatibility optimised with the technology for resin infusion, wet lay-up, prepreg and thermoplastic methods. By utilising this non-intrusive integration into the blade manufacturing process, we believe it is possible to establish a new standard of low-RCS wind blade manufacturing, saving considerable time in the planning process, and bringing additional benefits to the wind turbine itself, as discussed above.

One thing becoming more apparent in this age of wind proliferation and radar upgrades, is that large reflective structures will always inherently adversely affect the electromagnetic (EM) environment. Whether through clutter on a radar screen, track seduction of aircraft plots, interruption of line of sight, scrambling of radio and microwaves or disruption of myriad telecommunication transmissions, the construction of large structures with high reflectivity of electromagnetic waves can cause a chaotic EM environment.

Beyond the widely discussed clutter on radar screens and impact on aircraft and weather tracking, the EM effects of unmitigated wind turbines can be felt throughout many telecommunication operations. When a radar wave operating in the microwave region hits a structure, it can induce an oscillating charge on the surface, thus generating a current, which in turn produces a wave radiating scattered energy away from the structure. These scattered fields can cause interference to any device operating in this part of the EM spectrum.

A key area of research at Trelleborg’s applied technologies operation is to proactively calculate and predict the electromagnetic compatibility (EMC) of everything from wind components, turbine structures and whole windfarms. By computationally analysing the monostatic and bistatic RCS plot for wind turbines and their components, it is possible to start to categorise wind turbines in terms of how they might impact the EM environment.

By implementing a grading system, it should be possible for wind developers to know ahead of submitting a planning application, the likelihood of an objection from radar operators and telecommunication stakeholders, simply by selecting the wind turbine components and systems that fit into the highest EMC rating. Eventually, once the system is established, the EMC rating could become a key feature and benefit to note on wind turbines of choice, alongside hub height, swept area and MW capacity.

While the exact impact of windfarms will always need to be analysed on a case-by-case basis by key radar stakeholders (certainly in the short term), EMC categorisation can start the process of de-risking a large part of the risk of windfarm planning process with respect to whether an objection is going to be raised. Furthermore, by combining the EMC rating system with radar absorbing materials, such as FrameTM, wind developers will have the freedom to select the most appropriate wind turbines, not just in terms of power generated and service lifetime, but also how compatible the proposed windfarm will be with the wider EM environment.

Overall, this will benefit wind developers, reducing costly delays to windfarm applications by staying one step ahead of any anticipated objections. This method of reducing the EM interference of the wind turbine structures and thereby solving the problem ‘at source’ is a cornerstone to the future happy coexistence of windfarms and radar.

Further research projects include the development of new materials that can change their radar signature and absorption frequency, and advanced metamaterials to actively manipulate the radar wave at the point of contact to provide ultra-wideband absorption. By developing these materials, Trelleborg’s applied technologies operation hopes to provide a vital part of the solution needed by the wind industry to solve the issue of wind turbine radar interference; something that is rapidly becoming of paramount importance as countries across the world aim to reach their renewable energy targets.