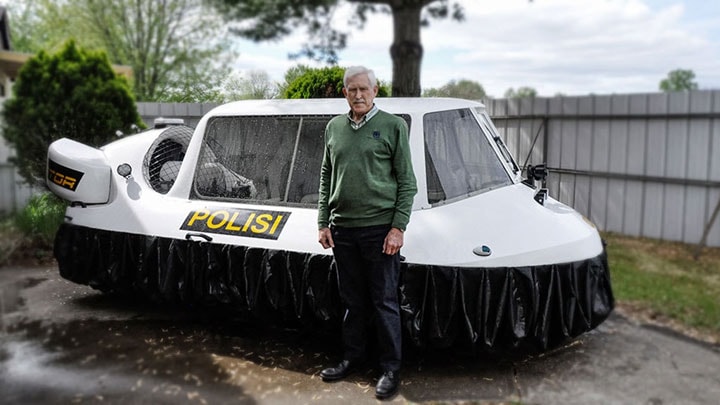 Neoteric Hovercraft’s vessels are used by rescue services worldwide. When the company needed a more durable solution for its hover skirts, it turned to Trelleborg for hard-wearing coated fabrics.

Now perhaps the world’s leading manufacturer of light hovercraft, Neoteric Hovercraft had humble beginnings. Founded by a group of teenage Australian Air Training Corp cadets in 1960, the company is still led today by one of those cadets, Chris Fitzgerald, now located in the U.S. state of Indiana.

Neoteric Hovercraft has customers in more than 50 countries, serving those in industries that include emergency services and leisure.

Fitzgerald, now 74 years of age, is a true hovercraft pioneer. He has devoted nearly 60 years of his life to the thriving business.

Neoteric’s success rests partly on its reverse thrust control system, which at 60 percent reverse thrust is proportionally far more powerful than the 18 percent of jet aircraft. This makes it the only hovercraft in the world that has effective brakes!

Search and rescue teams in particular appreciate the hovercraft’s stability on terrain from frozen lakes to swampy marshes. It means that rescuers can stand at the edge of the craft to pull someone on board without the risk of it capsizing.

“I’m happy to say our hovercrafts have helped save a lot of lives over the years, including in ice accidents in the Nordic Region,” says Fitzgerald. He once met a Finnish man who fell through the ice into a lake and was rescued by one of Neoteric’s hovercraft.

But uses for the hovercrafts go beyond rescues. Mining companies utilize them to apply dust control sealants inside mines, and they have been employed by agencies working to clean up oil spills. Then there are those who just love the thrill of racing them—especially in Europe.

Despite successful applications, Fitzgerald found that the hover skirts were wearing out too quickly under the stresses of everyday use on surfaces such as ice, sand and concrete.

“We’d been using 16-ounce (0.5-kg) neoprene-coated nylon for years, but this is too expensive and heavy. We’ve also used packcloth, but for proper durability neoprene-type material is required.

“You have to remember that a hovercraft is essentially a boat that’s sitting on a bubble of air. You need a material for the skirt that’s got to hold in the air but is not too heavy for the engine. You want to be touching the surface but let the air ‘lubricate’ the hovercraft’s movement.”

Having previously sourced materials from Reeves Brothers, Fitzgerald started researching coated fabrics. This led him to approach Trelleborg, which had acquired Reeves Brothers in 2006.

“The challenge was to find an abrasion-resistant material that could wear like iron yet would still be lightweight and air-retentive enough, so that the hovercraft could still operate effectively,” says David Behrens, Regional Sales Manager within Trelleborg Coated Systems. “Our research and development department produced some samples for Neoteric, and these were tested thoroughly.”

Neoteric’s testing machine is called the Flagellation Rig. It runs the material in a chamber at enormous speed and friction, like a hurricane hitting a flag, until the material comes apart. Trelleborg’s neoprene-coated fabric performed exceptionally well.

“The fabric is working really well and I’m happy with it,” says Fitzgerald, “although there’s huge scope for improving these fabrics further, given a bigger market.

“Ultimately I’d like to find a company that would be interested in taking over. But I’ve been in that mindset since I moved Neoteric Hovercraft to the United States back in 1975. It’s been my whole life.”

Chris Fitzgerald is from Melbourne, Australia. He is a trained technician at aeronautical research authorities and was drawn to hovercraft after seeing SON1’s English Channel crossing on Australian TV in 1959.

Things took off when he received a Rotary Foundation grant in 1969, which funded trips around the world to various hovercraft companies, including a four-month internship at British Hovercraft and a fateful meeting with a manufacturer in Terre Haute, Indiana, in the U.S.

Fitzgerald moved to the U.S. in late 1975 because the market was stronger, and he set up shop in Terre Haute. He began with kits before developing built-to-order models.

“I set up the Hovercraft Club of America in 1976 and also helped start the World Hovercraft Federation in the early 1980s. They’re still going strong,” says Fitzgerald. As for the name? Fitzgerald says that Neoteric means “newfangled” or modern. And as a noun it means “a person who advocates new ideas.” Highly appropriate!