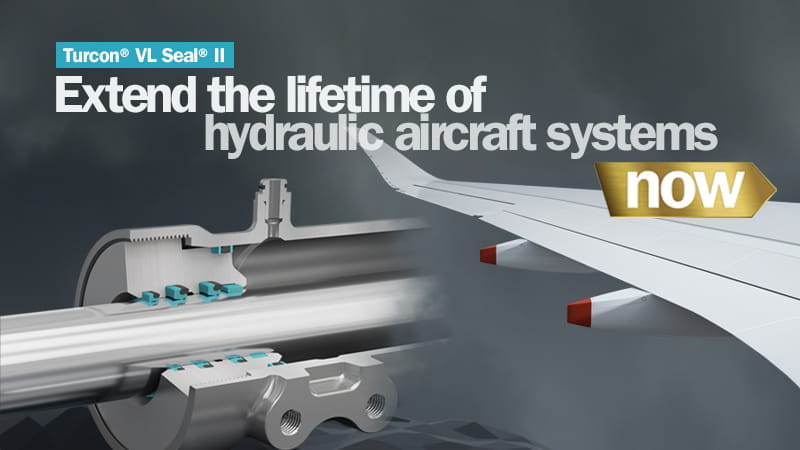 Torben Andersen, Director Aerospace Segment Management, says: “With Turcon® VL Seal® II, Trelleborg Sealing Solutions clearly shows that it is leading the revolution in aircraft hydraulic sealing. The performance of this seal is well beyond other seals on the market.

Torben continues: “During the five year development period, we undertook among other tests, rapid multi-million cycle testing on an advanced test bench that achieves pressure rise rates of up to 360,000 psi per second, and enables accelerated high frequency cycling up to 5 Hz, under maximum pressure or extreme temperature conditions. This meant that testing of potential designs for the improved seal occurred in just weeks rather than months, considerably shortening the proving time, and enabling us to reach the perfect seal design early in the testing phase.”

Demonstrating the performance of Turcon® VL Seal® II against Turcon® VL Seal®, which now represents the standard for this type of hydraulic seal, back-pumping performance was more than doubled up to 3,000 psi and almost doubled up to 5,000 psi. Accumulative leakage was around 4 milliliters less and significantly lower (around a half) from 1,000,000 to 2,000,000 cycles.

Turcon® VL Seal® II is a unidirectional rod seal for reciprocating movements, consisting of an “L” shaped Turcon® jacket energized by an O-Ring. The innovative design of the seal combines the unique back pumping capability of Turcon® VL Seal® with new patented features. An angled seal back allows seal width adjustment to service pressure, improving leakage control, while a leading protective front lip safeguards the sealing edge during hardware assembly. In addition, the seal’s FEA optimized design improves support for and containment of the O-Ring.

‘Sealed for life’ means the seal lasts as long as the actuator itself. In addition, negating the need for drain lines and with a profile that allows smaller hardware design, the seal can make a significant contribution to an aircraft manufacturer’s goal of weight saving and fuel efficiency. Used in a tandem sealing system, flight safety is increased, and back pumping enhanced.

Turcon® VL Seal® II is available in a range of Turcon® materials for use in a wide variety of extreme operating conditions. These are combined with O-Ring compounds suitable for use in all hydraulic fluids and service parameters.

Exceeding current aerospace standards for seal performance, Turcon® VL Seal® II is designed for installation in AS4716 O-Ring housing grooves, enabling fitment in place of other O-Ring-energized and Turcon® solutions, including the original Turcon® VL Seal®, Turcon® Plus Seal®, Turcon® Wedgpak® and Turcon® Variseal®, as well as other seal designs for these housing grooves. A metric version is also available.

For further information on the Turcon® VL Seal® II: