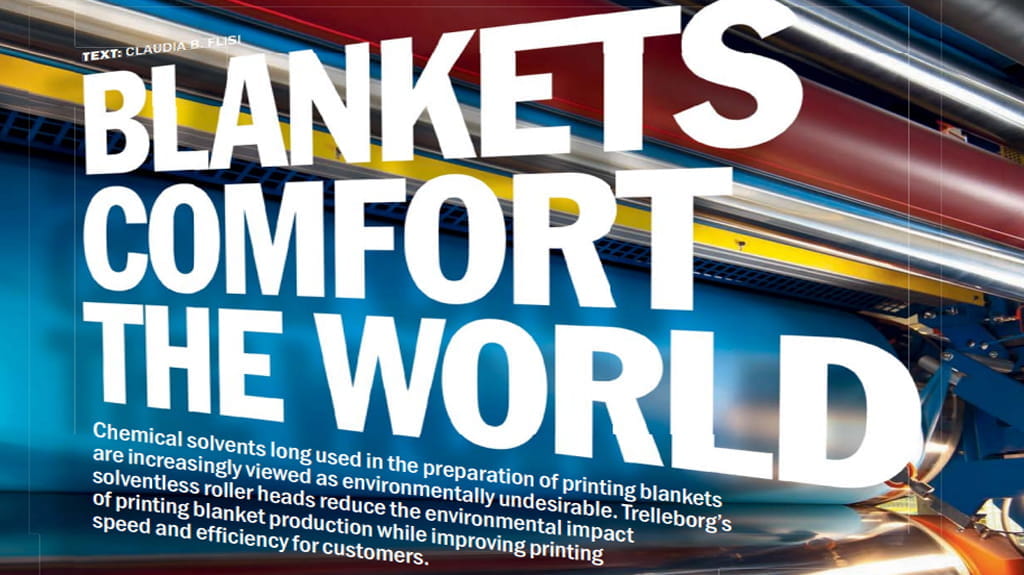 A little security is a valuable thing in life, according to Linus, the blanket-obsessed pal of Charlie Brown in the “Peanuts” comic strip. Security is equally valued in real life, notably when the “blanket” in question is part of modern printing equipment. Printing blankets are polymer-coated composite fabrics used to transfer printing ink from the plate to the printing surface, and the process to make them has traditionally entailed the use of combustible chemicals.

Back when the offset web press for paper printing was developed in 1904, environmental considerations were not a high priority. But expectations have changed in the past 110 years; chemical solvents once used for preparing printing blankets are increasingly recognized as undesirable.

Applications have also changed. Printing machines used to just churn out hundreds of thousands of newspapers now specialty machines are used to produce sophisticated packaging and for metal-decorated applications.

With more than half a century of experience in producing blankets for digital and offset presses, Trelleborg leads the world in this industry and is sensitive to both environmental issues as well as quality and performance considerations. “Attention to the environment, health and safety is a duty for Trelleborg,” says Environment Health & Safety Plant Engineering Manager at Trelleborg Coated Systems in Lodi Vecchio, Italy.

Although traditional technology for printing blanket production requires solvents, Trelleborg always operated in accordance with local laws and regulations, being at the forefront of respecting the environment and controlling its manufacturing process to achieve very low emissions.

Solvent-less solutions began to appear toward the end of the last decade. Trelleborg decided to develop its own solvent-less solution, incorporating not only the latest in printing technology but also customer expectations in terms of quality, speed and flexibility. In addition, the trend to larger cylinders prompted Trelleborg’s decision to design into its new Solvent-less Roller Head Line the capability of producing the largest blanket on the market at 2.7 meters.

Producing such a large printing blanket roll is not simply a question of making the cylinder longer. “This was a massive project in terms of complexity, dimensions, time, impact on the site, automation sophistication and controls on every parameter,” explains Trelleborg.

“We have moved production technology of printing blankets from spreading and coating to extrusion and calendering, completely changing the working process.” The new line was introduced in early 2013. By the end of 2014, the Solvent-less Roller Head Line will account for 70 percent of Trelleborg’s blanket production at the Lodi Vecchio facility and will reach 100 percent within five years. The reason for not switching the whole line right away is that Trelleborg makes 70 different types of printing blankets for different applications, and it would have been difficult to switch such a complex and wide range of products immediately.

Where the change has occurred, the results have been dramatic. In the Lodi Vecchio printing blankets manufacturing facility, use of solvents had averaged about 150,000 liters daily. During 2013 this was reduced by about 30 percent. In 2014 it is expected to drop by 50 percent and in 2015, the reduction will be up to 70 percent. The potential to provide customer satisfaction has increased equally as dramatically. The number of production phases has decreased from 19 to 11, with a clear added value to customers in terms of efficiency and time savings.

The thickness of the rubber blanket is much more controlled, and surface finishing has improved. Other initiatives by Trelleborg Coated Systems include a plan for 2014 to replace its air compressors with low-energy consumption and variable speed motor versions. This will reduce electrical consumption by about 10 percent and decrease emissions of CO2. Blanket-loving Linus and his environmentally-sensitive friend Charlie Brown would probably approve.