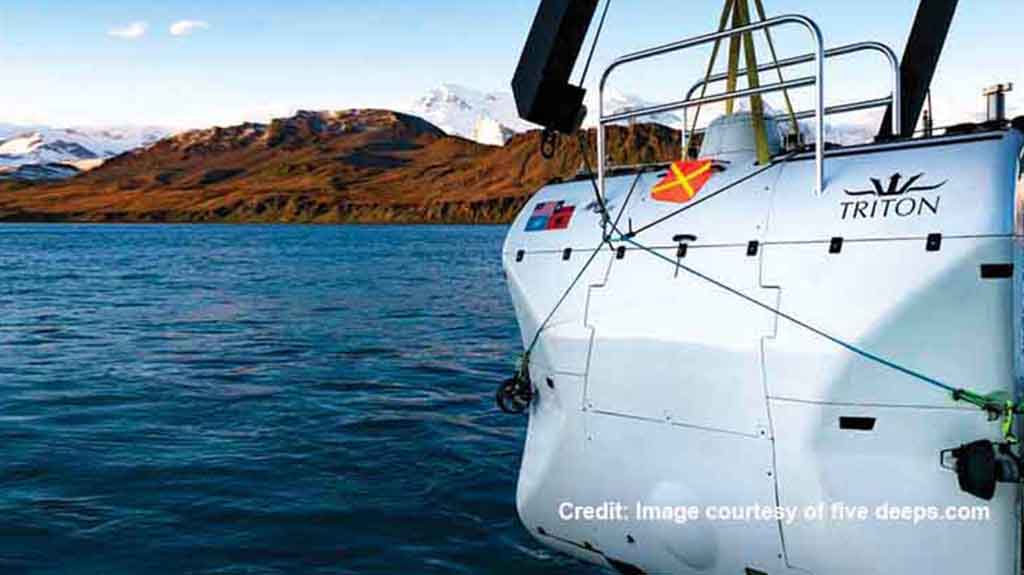 Triton Submarines design and custom build submersible vessels for science & archaeology exploration use, leisure use and filming, with vessels typically taking between ten to 18-months to complete When Victor Vescovo, an American extreme explorer who had already achieved the ‘Explorers Grand Slam’ by reaching both the North and South poles and climbing the highest summits on the seven continents, approached Triton Submarines with the concept of diving to the deepest points of the world’s five oceans, it was a challenge Triton were keen to accept.

The manned submersible vessel, needed to be capable of not only exploring places never visited before, including the deepest point on planet Earth: the Challenger Deep within the Mariana Trench in the Pacific Ocean, but also used for technical capability verification and scientific missions.

Alan Green, Triton Submarines Project Manager states, “We undertook a feasibility study initially and quickly found that there was no buoyancy available anywhere in the world that was accredited to full ocean depth. Ensuring our submersible achieved accreditation from DNV-GL was key for us, so we knew we would need to find the right partner to help us achieve the precise characteristics and specifications required for this unique project.”

The development of the Triton 36000/2 Full Ocean Depth (FOD) Submersible required a huge amount of collaboration between Trelleborg and Triton Submarines to support the overriding aim for the manned submersible to undertake repeated dives to full ocean depths.

Completed modules were then successfully tested at the Krylov State Research centre in St Petersburg and signed off by DNV-GL.

Trelleborg’s unique buoyancy modules are made from Eccofloat® composite foams. Eccofloat® provides high performance and ultra-low densities by selecting only the highest specification hollow glass microspheres and combining them within a rigid, high-strength resin system, overcoming the issue of weight for deep sea exploration.

Incorporating Eccofloat® materials into the submersible manufacture significantly reduced the density and weight of the buoyancy, whilst providing the highest strength to weight ratio to meet the ultra-deep-water environmental demands.

Alan Green, Triton Submarines, “The TG11500 has clearly demonstrated its fitness for purpose, by achieving exactly what it needed to – repeated dives to full ocean depths.”

In September 2019, after nearly three years of intensive efforts, the world’s first successful manned submersible expedition to the deepest point in each of the world’s five oceans, The Five Deeps Expedition, covered 47,000 nautical miles in just 10 months, and completed 40 dives including numerous at depths of over 10,000m.

The design, manufacture and engineering capabilities, and the combined efforts of the development team, produced something truly world class, enabling the maned submersible vessel to make five dives in the Mariana Trench in just 10 days.

Alan Green, Triton Submarines, “The can-do attitude, openness and responsiveness of the Trelleborg team, along with the collaborative relationship we developed was really appreciated. I felt like we were all working together as one. It was a real pleasure to work with the team at Rochdale.”